Docker is a hugely popular containerization platform that enables developers to build and deploy applications inside containers. Containers are isolated environments that package an entire application alongside its dependencies, libraries, configuration files, and everything required to make it run regardless of the computing environment.

In this guide, we focus on how to install Docker on Ubuntu 22.04.

The first step is to refresh the repositories. To do so, run the command:

Some dependencies are needed for the installation to go along seamlessly. Therefore, run the following command to install them:

Once the dependencies have been installed, proceed to the next step.

With the requirements installed, the next step is to install Docker. We will install the Docker Community Edition ( Docker  CE ) which is opensource and free to download and use.

To do so, we will add the GPGK key

Once added, add the Docker repository as follows.

Since Ubuntu 22.04 is yet to be officially released, add the repository for Ubuntu 20.04 Stable.

With the GPG key and the repository added, run the following command to install Docker and associated packages.

This installs Docker and all the additional packages, libraries, and dependencies required by Docker and associated packages.

Once the command runs successfully, consider adding the currently logged-in user to the docker group. This allows you to run docker without invoking sudo.

You can now run Docker commands as a regular user without any challenges.

Step 4: Confirm that Docker is installed

To verify that Docker is installed, run the command:

From the output, you can see that we have installed Docker 20.10 which is the latest version of Docker at the time of publishing this guide. 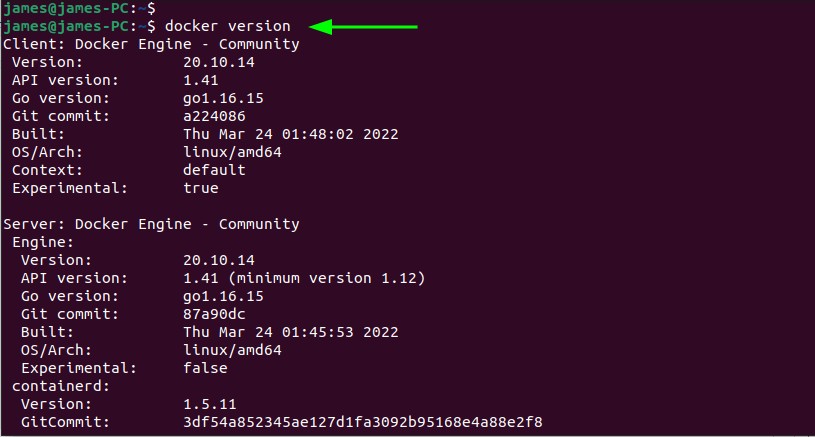 By default, Docker autostarts upon installation. To verify this, run the command:

If, for any reason, Docker is not running, simply execute the following command:

To enable Docker to start automatically every time on system startup, run the command:

To give Docker a test run, we will pull a ‘hello-world’ image from Docker Hub. From the image, a container will be created that displays a ‘Hello world’ message on the terminal along with the steps of what just happened after the command was executed.

So, we will run the command: 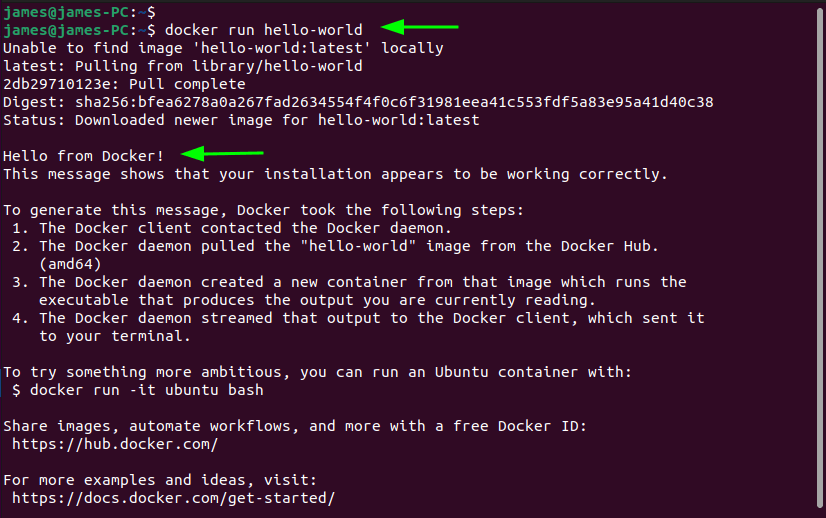 To confirm the images on the system, run the command:

After the container is created, it exits or stops automatically. You can still check stopped containers as shown.

And this wraps up our guide. In this guide, we walked you through the installation of Docker on Ubuntu 22.04.