Podman is the latest buzzword in containerization technology.  Unlike Docker, Podman is a daemonless containerization engine that is rapidly gaining traction amongst developers and is seen as a replacement for the good old docker. Just like Docker, it helps developers to develop, manage, and run their applications on containers. In this short topic, you will learn how to install Podman on CentOS 8 / RHEL 8.

Before you proceed, ensure you have a running instance of a CentOS 8 server. You can easily deploy a fully-managed VPS at Cloudcone only $3.71 to get started.

It’s always a good idea to update the system packages before getting started with the installation of additional packages. To grab your terminal as a sudo user and run the command:

After the successful update of your system, run the command below to install Podman on your system 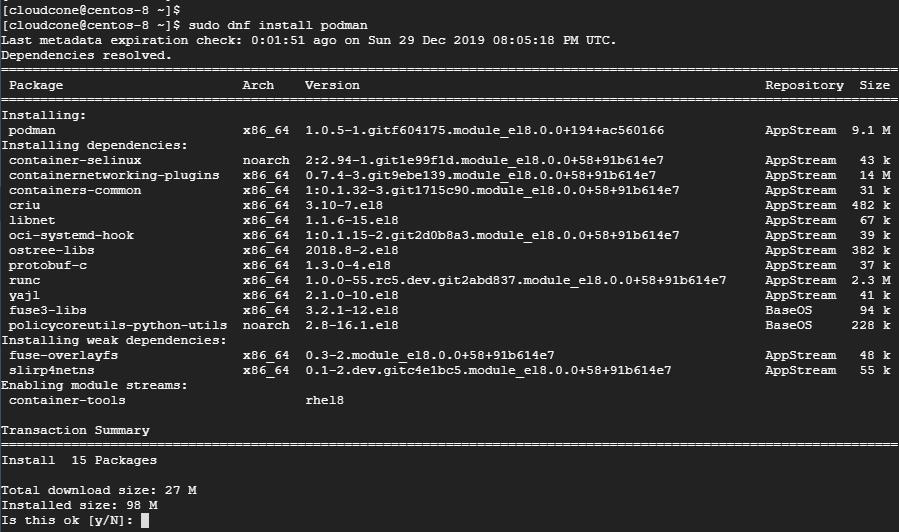 Just to check the version of podman, run

How to manage containers using Podman

So far, we have managed to install Podman on a CentOS 8 system. Let’s see how we can use it to perform various operations with containers.

To search for an image, just like you would in Docker use the syntax:

For example, to search for a Debian image, run the command:

The output will display the registry that you are searching in, the name and the description of the image and also the ‘Stars’ which indicate how popular the image is.

To download your preferred image, simply use the syntax

Let’s pull another image, this time the Nginx image.

Once you have pulled the images, you can list them using the command:

If you want to run an image, use the syntax

To run the Debian image and confirm the OS version, the command will be:

Once you obtain the shell, you can start running any commands on the image

To remove a container use the syntax:

From the output above, we can clearly see that after removing the container with Id 44cd43f136a1 , the running containers have been reduced to one.

To remove an image run

And that’s all for now. Thank you for your time.